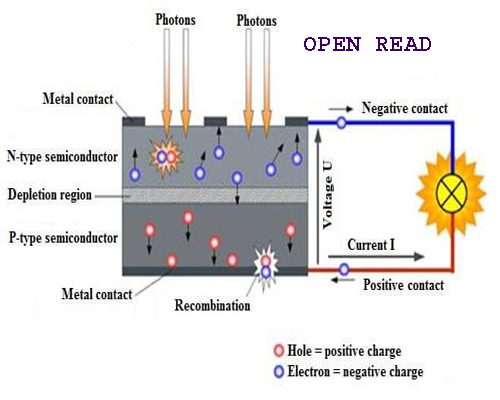 What is Photovoltaic Cell?

Solar PV cell means solar photo voltaic cell. A photovoltaic cell or solar cell is an electronic device solar cell is made up of different types of components like Silicon, germanium, Arsenide, Copper indium, Cadmium telluride, etc. Basically, most photovoltaic cells are made of Silicon due to their higher efficiency than some other components. However, silicon material is a semiconductor device whenever sunlight falls on the photovoltaic cell converts then sunlight converted into DC power by a special process. Basically, solar PV cell working for power production to meet the daily load demand. Basically, the solar PV cell started its journey in 1954 from Bell Laboratories. Nowadays it has taken a leading part around the world generate electricity.

What is Solar Energy?

Basically, a natural energy source in the world is decreasing arithmetically. For this reason, renewable energy sources can be the key to generating a large amount of energy. People are generating electricity by using solar energy to meet the daily load demand. However, we have discussed here solar PV cell working for power production. So take a look at how solar energy can be used to produce electricity by a special plant.

How do Solar Panels Manufacture?

Basically, solar PV cells made up of silicon and it is the main element of the solar plate manufacturing process. First of all, silicon sands are collected from nature (there is plenty of silicon in nature) and this silicon sand uses to create solar panels. In this case, silica sands are cooked at 20000 C in a furnace along with the source of carbon. These melted silicon sands are cooled and create metallurgical-grade silicon. It is not the end here, the impurity is removed from this metallurgical grade silicon and blended with phosphorous and Boron.

After this event, it was sliced into tiny wafers less than 0.2mm thick. Now it is ready to coat with silicon nitride. After the silicon coating, the silver is pasted on the front and rare surface. In this case, your solar panel is ready. This is a solar manufacturing or solar module manufacturing process. Now, this solar panel is tested manually to become that it is working properly. In this case, artificial heat is provided on the panel and checked that is it efficient or not. If the manual test becomes successful then these solar panel is ready to install to get electricity.

How does a Solar Panel System Work?

If we mixed silicon dioxide and carbon and heat it up to 20000 C then we get silicon. The atomic number of silicon is 14, its atomic weight is 28.086, and it is the most efficient device to generate electricity from sunlight. Basically, silicon is a semiconductor device. In some come conditions electricity can flow through it and sometimes electricity cannot flow through it. There are four electrons in the outer shell but we cannot use this silicon directly in the solar cell.

In this case, doping is most necessary for silicon. Doping means we need to increase some energy by providing extra energy. There are two types of doping in silicon: the first one is aluminum and phosphorous. The special feature of aluminum is there are three electrons in its outer shell but silicon has four electrons. If we doped with silicon and aluminum then we need one electron. Though there is a lack of one electron, that’s why this doping is called Positive doping (P-Type).

It does not end here, there is a layer between N-Type and P-Type which is called the depletion layer. Due to this depletion layer, they cannot exchange electrons between them. For this reason, a separate root is given to get electricity from the outer side. Whenever an electron flows from negative to positive then we can use a battery to charge up. It is noted that electrons cannot easily flow from N-type to P-Type.

In this case, sunlight is applied to heat up the N-Type particles and electrons easily flow to the P-type. Basically, N-type is on top and P-Type on the bottom. Basically, our biggest discussion is the main working procedure for the solar panel. It is noted that we get DC power from the solar panel but we need AC power. In this case, we have to convert DC power into AC power by helping a solar inverter.

Do Solar Panels Work During a Power Outage?

In a Grid tied system, you will not get electricity due to the better safety factor. If the power goes out then your appliances may have to make repairs on their distribution network. There may be a failed transformer that requires repair. To restore power to several thousand customers may face risk if any fault occurs. That’s why the traditional grid-tied solar systems must turn off whenever the power goes out. On the other hand, if you have a direct connection or if you don’t use batteries then you will not get power whenever the sunlight shuts off (night period). On the other hand, if you use a battery, you can use this DC storage power whenever sunlight is unavailable (night period).

How do Solar Panels Work When There is no Sun?

Can solar panels work at night? The direct answer is no. The solar panel does not work at night. If there is no sun then the solar panel become fails to generate electricity. In-depth, we have seen above if N-type doping would like to share electrons with P-type then we must need to generate the heat that we get from sunlight on a sunny day. In the off-sun period (night, or when there is no sun) no electron become exchanged between P-type and N-type doping. Basically, we get solar energy from sunlight.

That’s why solar cells cannot work during the off-sun period. How does solar power work at night? Basically, solar power work through two main processes: direct process and indirect process. The solar cell works directly on sunny days and generates a lot of electricity but some of these do not use and most of them are stored in batteries which are called indirect energy. However, the battery is stored DC power this DC power is converted into AC power by using an inverter to run electronic appliances at the night.

Do Solar Panels Work When Covered in Snow?

Solar panels work well on sunny days. If a solar cell is covered by snow and if there is no chance to fall sunlight on the solar panel due to snow, in that case, the solar panel will not work. There is one thing if snow falls on your solar panel then take the snow off from the solar panel and let your panel get a minimum heat to generate electricity and let your battery charge up. This undesired situation happens in the winter season. It is noted that if the snow becomes heavy on your PV cell the panel will never destroy and you don’t need to use water to clean it or if you want you can use water to clean it.

We get solar energy from the sun and solar energy is a renewable energy source that is used to generate electricity. Solar energy will never end until destroy the world. Basically, solar energy is undoubtedly trustable and long-term basis renewable energy source. However, we have shown the solar PV cell working for power production and we have shown the best photovoltaic cells in another article. So let’s start to use solar panels and safe our environment from the greenhouse effect. If you would like to know more about solar panels and some other energy sources then you may stay with openread.
visit. How Much Money Do Solar Panels Save? Advantage and Disadvantage of Solar Energy, Photovoltaic Panels Construction and Manufacturing Process.