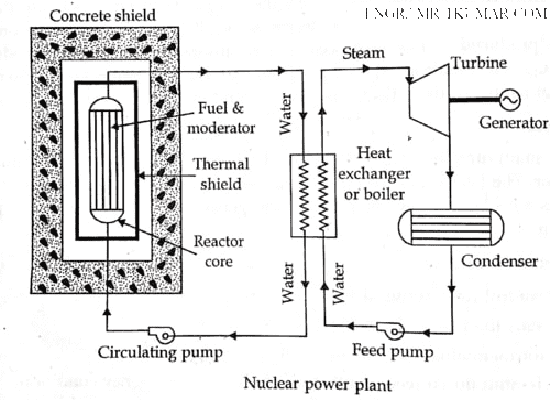 What is Nuclear Power Plant?

What is the Function of a Nuclear Power Plant?

A small amount of nuclear fuel is used to produce more power as compared to some other forms of electrical energy. In the power plant, more electrical power is produced by burning 1 kg of uranium. If you compare coal power plants and nuclear power plants, then you will be clear about energy generation. If you burn 1 kg of Uranium then a large amount of energy is generated as compared to the 4500 tons of high-grade coal combustion.

Atoms are built like tiny solar systems. The nucleus is at the center of the atom and the electron always surrounding the nucleus. The nucleus is made up of protons and neutrons, they are very densely packed together. The lightest element is a proton of hydrogen, the heaviest natural element, Uranium contains 92 protons.

In the core of nuclear reactors, in nuclear power generation stations, nuclear energy is emitted from the fission of uranium atoms that heats water to about 520 degrees Fahrenheit and generates steam. This steam is then used to rotate the turbines. Mention that turbines and generators are connected. When this steam hits the turbine hard, the turbine and the generator rotate together at a certain speed and generate electricity. Basically, there are 4 types of reactions occur that produce atomic energy.

If we generate electrical energy by using nuclear fuel then our per-unit cost will be very low, but nuclear fuel is very costly and may have a chance to explode.

What are the Advantages of Nuclear Energy for Power Plant?

Everything has merit and demerit. We know well nuclear fuel is highly responsible to generate large amounts of electricity. But there are some disadvantages and advantages. Now we are referring to some advantages of nuclear power plants:

What are the Disadvantages of Nuclear Energy for Power Plant?

. Everything has merits and demerits nuclear power plant has some disadvantages these are given below

What is a Nuclear Reactor?

The nuclear reactor is important equipment in the nuclear power plant which is used to subject from nuclear fuel. Nuclear fuel is widely used to generate electrical energy because of its low running cost, longer plant life, and reliable electricity supply. There are heavy elements is used in a nuclear power plant like (U 235 or Th232). The nuclear reactor is used to control the chain reactions which start once and then fission is done. If the chain reaction of the atomic power plant is not controlled the whole nuclear plant will be an explosion due to the nuclear energy release.

What is the Construction and Working of a Nuclear Reactor?

The control road consists of cadmium and is inserted into the nuclear reactor. Cadmium absorbs neutrons and it is a very strong neutron absorber and thus regulates the supply of neutrons for nuclear fission. When the control roads are pushed in deep enough then the control road absorbs most of the nuclear fission neutrons and hence some neutrons of available for chain reaction which therefore stops by this way chain reaction is increased. The heat is produced in the nuclear reactor and this heat is removed by the coolant (coolant is a sodium metal). It is noted that the nuclear power plant operating principle is not difficult but harmful to the disposal of radioactive substances.

What is a Heat Exchanger?

What is a Chain Reaction?

The chain reaction is an important thing for the nuclear power plant. Nuclear fission is done by bombarding Uranium235 or Th232 with slow-moving neutrons. Neutrons split the Uranium nuclei with the release of a large amount of nuclear energy and emit neutrons (that is called fission neutrons). These fission neutrons cause the next fission reaction. If this process occurs continuously then the huge amount of heat will release continue within a very short time and it can be caused a greater explosion. This nuclear reaction is called an explosive chain reaction. The nuclear reactor is widely used in nuclear power plants to control this chain reaction.

How to Select Site for Nuclear Power Plant?

Availability of water: Water is one of the important or essential elements for the atomic power plant because water is required for cooling purposes and creates steam. For this reason thermal power plant, the power plant is placed near the river so that available water can be used for the power plant.

Disposal of Radioactive waste: The waste is produced by the nuclear fission reaction in the nuclear power plant. The radioactive must be disposed of off sufficiently and successfully to avoid environmental pollution and health hazard. The wasted nuclear fuel should be buried or disposed off in the sea

Distance from the thickly populated areas: The nuclear power plant is very horrible and risky nuclear fuel can destroy a zone if an explosion occurs. For this reason, these power plants are always placed far away from the populated area. But more safety or protection system is used for the atomic power plant.

What is a Steam Turbine?

What is Nuclear Fission and Fusion Reaction?

The nuclear fusion reaction is one of the most dangerous nuclear reactions between two or more atomic nuclei and these are combined to form one or more subatomic particles and different atomic nuclei. It means that two or more atomic particles are combined and release a large number of atomic energy. The nuclear fusion reaction is used to make the atomic bomb.

Why Nuclear Power Plant is Popular?

A small amount of nuclear fuel can be generated bulk electricity than some other forms of energy sources (water, coal, oil, etc.). One statistic shows that 1 kg of uranium can produce as much energy but 4500 tons of high-grade coal cannot produce as much energy as a nuclear power. To generate more electricity people are trying to make nuclear power plants generate more clean electrical energy.

Nuclear energy is one of the most familiar energy sources in the world and is sometimes considered as a renewable energy source. We know well that nuclear fuel (Uranium, Thorium, and others) is very dangerous. If any mistake happens then it may contain a very severe situation. Uranium is being used for many purposes like generating electricity, but don’t worry about it.

It is because nowadays technology has been updated and people are taking more steps to control the chain reaction if an explosion occurs. Basically, a large number of safety and security process is adopted in the near power plants that make power plants secure. Basically, the reactor is used to control the chain reaction and also used some other safety factors. On the other hand, The IAEA assists member states in enforcing international safety standards to strengthen the safety of nuclear power plants.