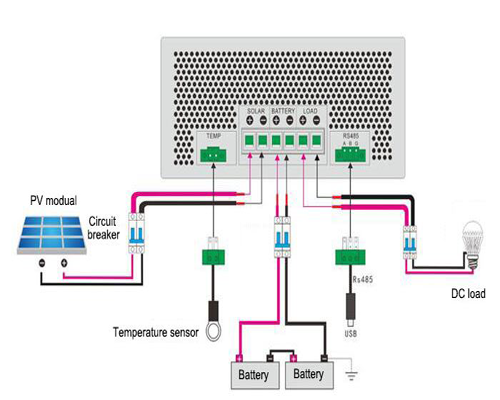 What is an inverter for solar panels?

Inverter means those who invert something. Indeed we use AC and most devices are designed for AC. The solar panel generates DC and if we wish to use it to meet our load then we must convert it into AC power. For this reason, the inverter is used to convert DC power generated from the solar panel into Alternating current (AC). It is noted that if we want to use only DC power then we don’t need to use an inverter. However, if we would like to connect the inverter then we must connect it to the charge controller. So, let’s see how to connect an inverter to the solar charge controller.

How to wire solar panels to inverter?

It is noted that the charge controller has three positive and negative terminals whereas the technician can connect it with the DC load beside the solar panel and battery connection.

How to connect solar inverter to distribution board?

How to connect inverter to ac panel? It is a very simple connection process. We have given the connection process above. However, we are giving short tips on how to connect solar inverter to distribution board. First of all, connect the inverter input terminals with the battery terminals and connect the inverter output with the AC panel or AC distribution box. Now you are ready to run your electronic devices.

How to connect inverter to solar charge controller?

What is a solar inverter and how does it work?

The rays of the sun fall over the solar panels are created by semiconductor layers of silicon. Two types of layers are present here; one is positive and another negative which is fixed by the junction. The layers of the semiconductor absorb the light when the sun shines and directs the energy to the PV cell. This energy moves, bumps of electrons lose and they pass within the positive and negative layers, which generates electric current known as Direct Current “DC”. This energy is stored in the battery or the inverter.

What do solar inverters do?

According to PV Evolution labs (PVEL), solar Inverters are the strong working components of the solar array. The inverter manages the operational features of any component of the PV system. With the increase of interactions along with the system grid and with aid of smart systems, the workload has doubled. Here are 5 duties that solar inverters do, for instance:

The key feature of an inverter is to transform direct current (DC) power that is generated alternating current (AC) power that can be used for businesses and houses.

Inverters track the solar arrays’ voltage to know the maximum power, and where modules can function well. The shaded modules can connect to the wrong peak which lessens energy production.

Cooperate with the grid

Better inverters can switch into the reserve mode when the voltage changes. This process makes sure that minimal voltages are getting out of range and unsteady power production.

Some inverters can communicate through the hardwired Ethernet and WI-Fi. This communication can lead to cyber-attacks. Solar owners can track these problems and see the power production information, error codes, and diagnostics with the help of “SolarEdge”. To fix this problem permanently, the solar owners can invest in better monitoring services, and fix the problem of multi-inverter arrays along with third-party vendor “Solar Log”.

According to PVEL, due to material degradation and a stale system, the inverters may shut down. Since inverters perform multiple tasks and several electronic parts; they may not perform well than other components of the PV system.

What is an off-grid solar inverter?

The finest off-grid inverters have an aptitude for EV charging and they save energy for the foreseeable future. This inverter will let you be self-reliant and you don’t have to depend on other providers who are not trustworthy. If you want to buy an off-grid solar inverter you must go through some factors that might help you to buy a better one.

Final word of how to connect inverter to solar charge controller