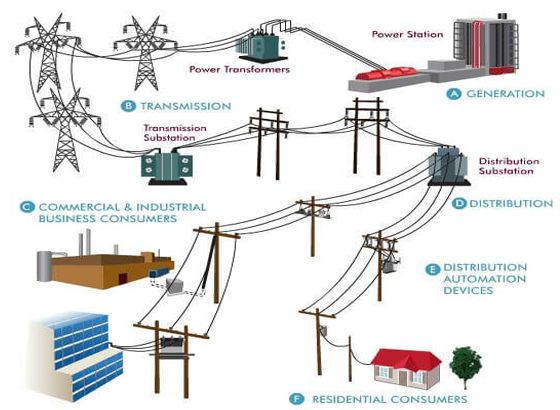 What is Electrical Power System?

What is the Sources of Electricity?

We know that an electrical power system consists of three main parts, such as power generation, transmission system, and distribution system. Though there are lots of renewable energy sources in the world, such as water, wind, sunlight, biofuels, nuclear energy, and others but these are not at the professional level for all countries. It is noted that electrical power is generated in the electricity generation station by the combination of some devices.

An electrical power plant is a place where electrical energy is generated by some special plan and process. Electricity is transmitted from generating station to the load center by the transmission line and voltage is stepped down by using a step-down transformer. Basically, these processes happen through a massive plan and a large number of devices. Indeed all the process happens due to the use of electricity in our daily life. Basically, the process of power generation transmission and distribution is not easy due to some difficulties. The modern power system consists of a large number of components, and these are used in various places. These valuable components are given below.

Certain standard voltages for transmission and distribution are common in the world. The maximum convenient value for the system is determined by considering the capacity of the generator.

What is Transmission Line

What is Transposition in Transmission Line?

What is Power Distribution System?

The electrical process of power generation transmission and distribution is the first and last steps of the power supply system. A distribution line is a circuit that is built to deliver or distribute electric power at the consumer level, i.e. shops, houses, industries, etc. It has many branches and is connected by numerous tapping services. There are two types of a distribution systems based on the distribution voltage:

Explain the generation transmission and distribution of electricity is essential. Because all the electrical engineers should know the electricity supply system. Whereas bulk electrical energy is produced by a special plant which is called an electrical generating station. Basically, the generation voltage is 11KV and steps up to a very high voltage based on the transmission distance (usually 132KV, 230KV, 400KV, etc.).

What is Electrical Grid System?

The high-voltage electrical power line is spread like a net in the entire country from the process of power generation transmission and distribution to share power it is called a grid system. The power of any power plant can be shared (older power plants can share power with new power plants), and it can be transmitted from one place to another place.

A grid system or power grid is the system of a combined supply of electricity generated by multiple power plants through a transmission line at a certain high-quality voltage within a network. In short, whenever some of the power plants operated together or share power to meet the load demand it is called an interconnected grid system.

What is Corona Effect?

The phenomenon of violet glowing and producing a hissing noise is called the corona. Corona always occurs in an AC circuit. A special stage occurs when two conductors are kept in a position greater than the spacing diameter and their horizontal AC voltage is gradually increased.

The air around this special phase conductor is ionized by electrostatic stress and the insulation in the air breaks. In this state, light purple rays are seen and weight gas is formed which is known as the corona.

What is Proximity Effect?

When there is another conductor next to one conductor, its flux is induced in the current conductor next to it. The results of this flux appear to be greater in the near half than in the distant half of both conductors. As a result, unequal current distribution occurs, and resistance like the skin effect increases. This phenomenon is called the proximity effect.

What is Ferranti Effect?

What is Overhead Transmission?

Overhead means above the head. The line that is drawn over the head is the overhead line. In the case of overhead transmission, the maximum stress is between conductive and neutral. That is why in the case of saving, it is better to consider the maximum voltage conductor for transmission of even power, even distance, even in the neutral wire.

We already discussed above explain the generation transmission and distribution of electricity. You can get better knowledge about overhead transmission voltage range. Main considerations: Cost, Life, Brittle, Weight, Resistance, Power loss, Tensile strength, Low specific gravity, Temperature Coefficient, and shorter Sag. There are some main parts or equipment used in the overhead transmission line, such as

What is Safety factor?

The safety factor is an important issue in the electrical power system. The ratio of puncture strength and flash overvoltage is called the safety factor. Suppose we are calculating for a residential safety factor then we have a current value of 20 Amp and a safety factor has 35%. In this case, we have to design an electrical system by multiplying current and safety factors (20 * 25%) = 7 Amp

What is Sag and Tension?

The distance from the horizontal imaginary line connecting the two points at which the two towers are drawn or connected to the maximum hanging point of the wire is called sag. That is, the difference between the lowest point of the conductor and the plane of the support is called sag.

Tension is the tensest state of the conductor, and this condition occurs in the winter season. Sag and tension are inversely proportional to each other. If the sag is increased ten tension decreases and if tension increase then sags decrease and vice-versa. There is a statutory limit of sag and tension for the overhead conductor.

What is Underground Cable?

Basically, the underground cable is made of many insulations. Because if a fault occurs then it is complex to find and make health. It is noted that the chances of underground faults are very rare than the overhead transmission line. There are some special parts of an underground cable that are given below:

Does an ungrounded electrical system require the main bonding jumper?

There are also some demerits of the underground system but it is more secure and reliable. Basically, the main bonding jumper is used to connect the grounding conductor contained in each branch circuit. This main bonding jumper needs to contain a means of disconnecting (switch) for electrical service that encloses the base tie with neutral conductors that need to be disconnected from the service.

What is Electrical Substation?

What is the Importance of Electrical Substation?

The main Consideration to Build a Substation

We know that substation is an important part of the modern power system. Basically, electrical voltage is divided into the substation. Sometimes voltage can step up or step down by using a power transformer. There is more consideration for building a substation. If you would like to select places for the electrical substation you must think about some important terms:

What are the Types of Substations?

We told before electrical substation means that whereas voltage level is changed by using some special apparatus. the transformer is one of the most crucial devices in the substation that is used to change voltage levels. There are different types of substations but we are discussing some of them.

What is Transmission Substation?

What is Transformer Substation?

What is Distribution Substation?

What is Unit Substation?

What is Power Factor?

What is Power Triangle?

What are the Causes of Low Power Factor?

What are the Power Factor Improvement Equipments?

What are the Disadvantages of Low Power Factor?