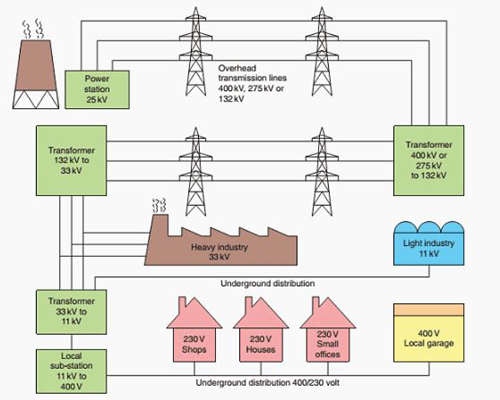 What is an Electric Supply System?

Power generating stations generate electricity by converting energy from some other forms of energy (like mechanical energy) into electrical energy at relatively low voltage levels. Generating electricity at low voltage levels is economical in many ways. This generation voltage (11KV) is a step up to the high voltage by using a step up transformer (132KV, 220KV, 400KV).

For example, the generating station can generate a voltage of 11 kV but if the load center is 1000km away there is a need to transmit a moderate amount of power to reduce the transmission loss. The transmission line can be subdivided into three main categories depending on the transmission voltage and distance.

If the overhead transmission length becomes 50 miles to 150 miles from the generating station or supply center, and line voltage becomes more than moderately high like 20KV to 100KV this kind of transmission line is called a medium transmission line.

What is Line Voltage and Phase Voltage?

Whereas single-phase power carries 220 volts or 230 volts for small domestic loads, municipal loads, and others where 220 volts or 230 volts is required. It is noted that a single-phase power load requires a neutral wire to connect. If we calculate the single phase voltage then it will be clear. Let’s see we know that line to line voltage or phase to phase voltage is 240 volts but if we measure phase to neutral then we will get 120 volts. The 120/240-volts notation identifies the neutral voltage from the phase and the phase to phase voltage.

We know that Modern Electrical Supply System consists of generation, transmission, and distribution systems. The generation voltage of the power plant is about 11kV (phase to phase). If it is sent directly to a distance of about 100 km, then all the energy will be lost due to the resistance in the line. And the voltage at the receiving end will be very low. So it is enhanced with a step-up transformer during operation. In Bangladesh it is up to 132KV, 230KV, 400KV. However, the 65KV system is going to come in front.

It is first lowered to 33KV, then to 11KV, and finally to 0.4KV before being given at the customer level. I have already said that these are the phase-to-phase voltages of all three-phase systems. The three phase system has three live phases. In this house residential connection is provided with neutral with any one phase of 0.4KV or 400 volts three phase line. The phase-to-neutral voltage is 63% lower than the phase-to-phase voltage, which is why you get 220 volts at home.

If you keep the voltage as you wish, you will not be able to use the charger of your expensive smartphone brought from China to your home. And not all countries make all the equipment in the power system. So if there is a different standard, foreign machines or transformers will not work in your country.

Is 0.4 Volt Given at Consumer Level?

No. It depends on the amount and type of load of the customer. Industrial connections are also provided in very high voltages. Small industries are loaded at 11KV, medium, and big industries at 33KV. But they can use 230V or 400V. It is mainly based on their operating system.

What Type of Conductors is Suitable for an Overhead Transmission Line?

We know that if we use electrical energy we have to pay the charge. For this reason, if the power line is connected to your meter but you have never used electricity yet. In this case, you have to pay the minimum charge. Because the power line is connected to your energy meter due to your service money. For this reason, consumers need to pay electricity charges.

How does a Supply Company divide Power Demand between Consumers?