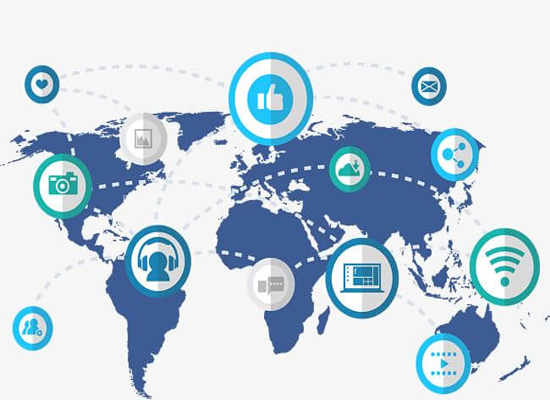 Globalization is the expansion of ideas, knowledge, information, goods, and services across the globe. In business, the word is used to define integrated economies that are characterized by free trade, open capital flow among countries, and easy access to foreign resources, especially labor markets, in order to optimize returns and benefit for the common good. The technological globalization and impact of globalization in the world means that the world is improving arithmetically but we are facing much trouble,

The convergence of cultural and economic systems drives globalization, or globalization as it is known in various parts of the world. Increased engagement, integration, and interdependence among nations are encouraged – and in some circumstances required – by this convergence. The world grows more globalized when more countries and areas become politically, culturally, and economically intertwined.

What is Globalization meaning?

We commonly hear the term “globalization” used in a variety of circumstances and as a notion to signify increased trade, foreign corporations, and even the ongoing economic crisis. Before diving into a comprehensive examination of the term and its different expressions, it’s vital to define what we mean by globalization.

Globalization can be defined as the effect of the global economy’s opening up and the resulting increase in cross-national trade. In other words, as countries that were previously closed to trade and international investment open up their economies and go global, the world’s economies become more interconnected and integrated. This is a quick overview of globalization.

What is technological globalization?

The growing speed of technological dissemination across the global economy is referred to as technological globalization. It refers to the transfer of technology from developed to poor countries around the world. We can observe how, as a result of globalization, technology spread more easily, thanks to political globalization (greater nation-to-nation interconnection) and economic globalization (the rise of a global economy facilitated by the liberalization of trade). Free trade agreements, for example, can make it simpler to transport innovations across borders, and manufacturing in developing countries can make those technologies cheaper to create.

These are the consequences of globalization for developing countries.

1. National Currency Depreciation – Since the 1990s, as a result of globalization, the value of national currencies has fallen dramatically in tandem with the growth of national income. The countries of the Third World are the hardest hit.

2. The emergence of foreign industries – the world’s largest industrial conglomerates are encroaching on developing countries’ markets. As a result, the industrial system in the United States has crumbled.

3. Growing foreign ownership impact in various financial sectors – Banks of emerging countries around the world, as well as increasing foreign ownership influence in the industrial sector. One of the effects of globalization on the labor system is the privatization of industries. As a result, demand for labor is decreasing, resulting in layoffs.

What are the types of globalization?

There are three types of globalization. These are given below.

The exchanging of ideas and information between and across countries is referred to as social globalization. The Internet and social media are at the center of this in today’s world. Internationally popular films, books, and television programs are good instances of social globalization.

The Harry Potter/Twilight films and novels have become worldwide successes, with the characters included being instantly recognizable. This cultural flow, on the other hand, tends to emanate from the center (i.e. from developed countries such as the USA to less developed countries). Cultural differences are said to be eroding as a result of social globalization.

The term “economic globalization” refers to the interdependence of economies as a result of trade and resource exchange. As a result, no national economy truly runs in isolation, implying that national economies impact one another. The worldwide recession that began in 2007 is a vivid example of this.

What are the advantages and disadvantages of globalization?

There are many advantages of globalization, such as

1. Technology and Language in Communication

The causes and repercussions of communication technology globalization might be stated. Traditional theatrical media can now be viewed, read, or heard everywhere in the world, thanks to technological advancements. In addition, there is the usage of the Internet and social media, each of which has its own set of drawbacks.

As a result, you may get real-time information on what is happening just a few miles away from one continent to the next, including information regarding extended time zones. This holds true for all kinds of information, including news, cultural or political events, environmental circumstances, technology advancements, and so on.

It has facilitated linguistic exchange, resulting in a greater understanding of languages other than one’s own tongue, which is becoming increasingly bilingual, bilingual, or multilingual. Communication has profited from technological advancements in transportation, mostly because the time it takes to send or receive something from one location to another has decreased dramatically in recent years.

2. The division of culture

Globalization has provided a significant advantage in introducing one region to another in all aspects of culture, including music, dance, cinema, visual and performing arts, literature, fashion, gastronomy, language, and religion. By coexisting distinct customs or traditions and developing new cultures or subcultures, previously unknown cultural traits of some locations, even those that were superstitious, have transcended highly divergent and even contradictory characteristics in the same region. There are more advantages to globalization

Globalization and the growth of cultural communication have boosted regional and international tourism. The accessibility of information on places that may or may not exist has sparked a desire in getting to know these places firsthand. Globalization has resulted in the development of a tourist industry that directly responds to the demand for travel.

The most recent example is a music tour, which has established a travel agency dedicated solely to organizing visits to concerts and music festivals, as well as travel routes (land, air, and event only for that particular event).

Another type of tourism is ecological tourism, which involves taking part in environmental programs such as beach litter collection and captive animals, among other things. Humanitarian tourism, which strives to support NGOs or foundations in needy areas, and educational tourism, which promotes study courses in other countries, are both examples of this.

4. Human rights are on the rise.

The establishment of new international human rights laws and treaties is one of globalization’s great achievements. These rights are regarded as “universal,” meaning that they must be applicable worldwide, regardless of gender, caste, religion, economic or social standing. This is exemplified by the United Nations’ Universal Declaration of Human Rights and the International Bill of Human Rights.

Knowing the laws of other countries has permitted regular advancement among others, despite the fact that many times a society trying to adopt specific rules is unprepared; this has resulted in a lot of disagreement. The sacredness of the LGBT community’s rights, marijuana legalization, and abortion are just a few examples.

Because communication and language acquisition are so close together, knowledge and research methodologies can be shared all across the world. As a result, rapid development has been possible in fields including health, the environment, and astronomy, among others. These advancements, on the other hand, can be applied to a wide range of places.

6. The globalization of business

There is a lot of talk about the elimination or reduction of borders in the economic area because the differences between countries are restricted to being an advantage when doing business between the private sector and governments. The decision-maker in expressing this advantage is communication and transportation technologies.

The global supply chain is a good example of how globalization has affected business. These issues are generated when a company (or a combination of companies) places a product in various stages of production in several nations and weighs the benefits and drawbacks of performing each stage in each country. Economic consolidation, the formation of international agreements to remove or lower trade barriers, and growth in exports and imports are all results of this circumstance.

International economic institutions such as the World Bank and the International Monetary Fund are established, foreign investment is boosted, global value chains are established, and low-cost labor becomes available. As a result, a country’s availability of other far-flung products may be greater and at a lower price than previously accomplished. The above pertains to industry or manufacturing, but similar ease of doing business can also be found in culture, tourism, education, and other areas.

When customs and traditions collide, one culture often gains more clout than the other. In some cases, this results in the extinction of lesser-known cultures, as well as the loss of national identity.

When different cultures are mixed, each one can become extinct, and a new one can emerge. Similarly, when many cultures coexist in one location, the identity of that location or its source may be unknown.

The ease of foreign trade that some companies have turned into transnationals where large amounts of capital are concentrated, and represent unfair competition for other small entities, including local businesses. Inequalities are also seen in countries, as some have become economic powers while others have not been able to be part of globalization due to their own natural or social characteristics. This has made many more differences between each other. In this case, unfair competition is also observed, which creates more imbalance.

Someone wants to learn a language that is mastered or known by the majority of people inability to talk with as many things as possible. Many minority languages that have been associated with indigenous culture for generations have been lost.

Locally made products can be pricey due to the ease with which they can be made outside of a country and the low cost (due to their overcrowding and the global chain processes they go through). As a result, the population no longer consumes these products, reducing local trade.

Because labor in some developing countries is extremely cheap, many companies prefer to manufacture or relocate there, reducing employment opportunities in developed countries. Even in developing countries, if one implements a policy that benefits foreign investment more than the other, companies will shift their processes from one to the other, where production will be at a loss as before, as it will leave without it. Source of employment.

Companies prefer to shift their production to low-cost countries where labor is scarce and labor rights have been severely harmed or eroded in many cases. It has progressed to the point where it is affecting human rights.

7. Foreign interference or reduction of sovereignty

Because of the close ties that have developed between the two countries, decisions made in one country have a direct impact on the other. As a result, it is common for one government to exert influence over the other in order to avoid harm. This can happen even in the private sector when a foreign organization has the ability to influence a government’s political decisions.

What is the definition of market globalization?

Market Globalization is the process of integrating markets in the global economy, resulting in greater interconnectedness between national economies. In an increasingly interdependent and integrated global economy, marketing globalization is a synergistic term combining the promotion and sale of goods and services. It renders businesses stateless, devoid of boundaries, with the internet serving as a vital marketing and cultural tool.